A couple of club members are running a campaign set in 1833, in Sudan. Here i will post their reports
and information for players. So without further ado...

Tensions are running high in Eastern Soudan, with a number of Beja tribes going over to the Mahdi. Others however still vacillate, and others still, resist the call of Jihad. Fakir Hicks and a large Egyptian army have started on a major campaign in Southern Soudan and everyone awaits news of the progress of this expedition.
At Souakin, Governor Suleiman el Niazi is fearful of the town falling to Mahdist forces. The Eastern Soudan is dotted with small garrisons mainly used for policing the ever-restless tribes, and in tax collection.
Tipilli is one such garrison of some 2000 souls, consisting mostly of various Beja tribal families. The Garrison itself is commanded by British officers in the service of The Khedive, with mainly Turkish, Armenian and Egyptian Subalterns and NCO’s. The rank and file are mainly Soudanese riflemen, with a force of mounted Egyptian infantry. The British Officers at Tipilli, although few in number, project the very highest standards of martial ability and moral hegemony. While demonstrably the best world has to offer in terms of fighting skill and command, few can doubt the moral and intellectual superiority of the quintessential, British Gentleman.
The enemy forces consist of fanatical jihadists inspired by ‘The Mahdi’, a prophet sent by God to free the Soudan of infidels. In the Eastern Soudan these consist mainly of Beja tribes, notably the Hadendowa. They are fast moving and ferocious warriors, capable of travelling great distances and still fit to fight a battle. While some Amirs are more skilled in the political rather than martial arts, the very best of the Amirs are cunning and ruthless and need to be treated with great care. 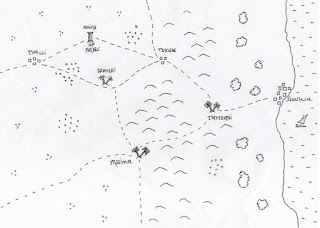 Tripilli and the Eastern Sudan

Early Eve on the 13th September, a messenger arrived at the fort with a message retrieved from a previously dead messenger for our Colonel (Herbert Drydon-Spunck). Unfortunately our Colonel was ill so Hugo (Capt. Warburton) took the message and upon reading it summoned me.

The recently retrieved message was from HQ ordering us to retreat from our location to the coast with the entire garrison and civilians to avoid an impending attack from fuzzy wuzzys of overwhelming force. The message looked genuine and had the seal intact.

So orders where given to ready the troops to be equipped for the march the next day and civilians of note would accompany the baggage. I ordered that all stores that where not to be taken including surplus ammunition to be destroyed.

The march went well on the first day, no enemy was sighted and we made good time, the picket were set overnight and also no trouble was entered.

The second day I decided to head for the Oasis of Wandi instead of the ruins of Sebu for if the enemy turned out to be in force ahead of us it would give more option to advance from that position.

Nearing late afternoon our scouts reported that the oasis had already been taken by a small force of the enemy, and we continued the advance into effective long range then opened fire. This caused the enemy to advance a little so we also advanced and gave them a double volley causing half their men to run. The ground ahead was slick with their blood.

Meanwhile scouts from the rear of our column reported camels advancing from behind. Hugo and his company of Egyptians dismounted and readied themselves for the attack.

The fight from the front of the column continued and another 2 groups of fuzzy wuzzys appeared before us. The second groups almost made it into hand to hand combat but thanks be that our training in musket drill paid off and they fell before our guns like scythed corn, all brave warriors.

The camels to the rear charged and again the good commands and musket fire decimated them into a rout. Meanwhile a new threat found itself on the left flank, a force of horsemen! No sooner had the front enemy been finished than they where charging towards us, ammunition was short and one company of troops was lost and by Jove where they broke through was right before me and my small command group, thankfully we dove them off.

And thus ended the second day. We made camp where we fought, treated our wounded, set pickets and made ready for the next day.

Note to self: ammunition for the rear guard and front and left flank company ran close to breaking point. Will arrange for one half company from each section to fetch and carry ammunition from the mules, as they cannot be supplying ammunition to the rear of the column as well as the front.
Simon 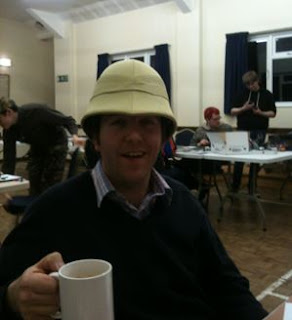 The Hero of Wandi. Lt. Simon Bladdington in the Officer’s Mess at Souakin prior to despatch to The Garrison of Tipilli. Lt. Bladdington’s timely intervention saved the square ! (actually a sort of interesting, curved rhomboid). 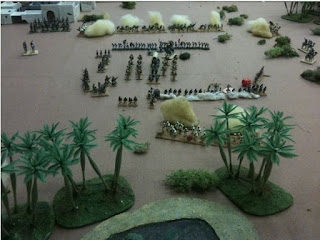