The Forces of The Mahdists’ Amir Ahmad Fadil and Amir Mohammad Tamal have been roundly beaten. A head count of dead and seriously wounded Mahdists is in excess of 1100 warriors. The best estimates of the remaining combined Mahdist strength is 6000 warriors. The main body of Mahdists appear to have withdrawn to the East. Amir Musa Wad Sagh (Friendly Christian Amir) has sent men to shadow the Mahdists and to report on their movements.
The action at Wandi is a triumphant Egyptian victory. Casualties are just 32 men killed and 75 men wounded. These are all from the 10th Sudanese Battalion, although one man from the 14th accidentally shot himself in the foot. The men however are elated by their victory. In particular, the Sudanese conscripts keep making shrill calls, and chant ‘Bey Bladda, Bey Bladda’.
Lt. Bladdington has risen considerably in the eyes of his men and benefits from +1 Imperial Reaction Roll when within 50 yards (1”) of Sudanese troops under his command.


While The Egyptian forces move east towards Toker, Amir Osman Digna moves to cut the Egyptians off from Suakin. The local commander at Toker, Lt. Benjamin Hacker, sends a message to urge his comrades to hurry to Toker where their resupply awaits them. However, upon arrival at Toker, our stalwart heroes discover Osman Digna is nearby, and will surely attack them at dawn. Hurriedly they prepare their defences and await the onslaught of 20,000 Mahdists. 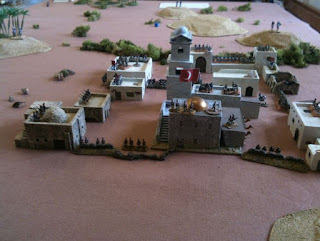 Defences Prepared at Toker. Note the denuded defences in preference to the Eastern defences in the next picture. 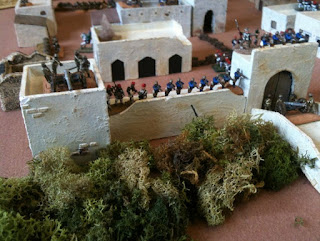 What follows is the Official record from Officers’ reports:

Having soundly beaten off up to 10,000 Mahdists at The Oasis of Wandi, I decided (Colonel Herbert Drydon-Spunck still being indisposed), to rest the men overnight and the following day to force march to Toker , which we reached a few hours before dusk.

Shortly after our arrival at Toker, I received intelligence that up to 25,000 Mahdists were heading for our location, and were expected to arrive the following day.  Given our relative speeds on the March, I decided to remain at Toker, using what time we had to improve the local defences.

The Mahdists attacked from both East and West in large numbers; I chose to place myself before the main thrust of the enemy attack, and although a close run thing, with the assistance of Lt Hackett (Adjutant Commander, Toker) I managed to beat them off.  By this time Lt Bladdington had been forced to abandon the perimeter and had fallen back before the Mahdists, so I took a Btn of Sudanese under my direct command and rushed to support his crumbling defence; on seeing what I was about, the remaining Mahdists realised the game was up and turned tail and fled. 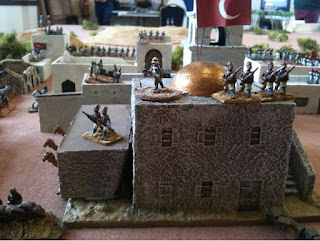 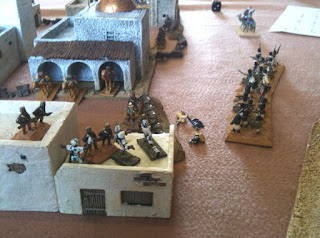 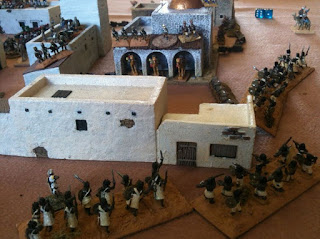 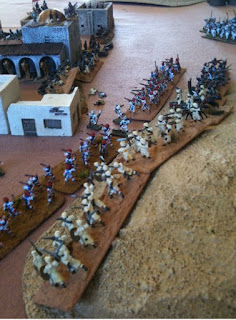 Third and forth waves following up.

The morning of the day after the Battle of the Wandi a messenger came in from Toker. The new orders told of how lieutenant Hacker was waiting at Toker with his men and supplies to continue our march to the coast and our scouts had reported enemy activity on the other road.

It was decided to march in quick time to Toker.  A messenger was sent a to tell Lieutenant Hacker to make ready to leave for the following day. We arrived in Toker late afternoon (of the 14th) and met with Hacker who had news of a large force of Mahdists ahead of us 3 times our number. Captain Warburton decided that we would make our stand at Toker, as Colonel Drydon-Spunck was still too ill to give orders.

Order where given to:

fortify the town as best as could be done;
clear trees blocking line of sight;
extra guards placed on wells stores;

Lieutenant Hacker’s own quarters where knocked down to help fortify the town. Civilians where advised to leave the town.

The defence of the town was set with all Hacker’s and Warburton’s men plus cannons and artillery plus 1 third of my command set to defend the Eastern end of the town where the enemy where expected to attack from. The remaining two thirds of my Brave Sudanese troops where set to guard the rear and sides of the town but with so much ground to cover there numbers where a little thin. One artillery piece was set on top of the Amoury in the centre of town to give supporting fire in all directions although at limited angle of fire.

Early in the Morning (of The 16th) an assassination attempt was made on the British Officers. My Sudanese troops stopped the attempt on my own self, Warburton and Hacker had a much closer encounter. Warburton emptied the brains of his foe with his pistols and Hacker managed to wound and capture his would-be assassin. Under Egyptian interrogation the ring-leaders where rounded up and put under lock and key until they could be questions properly.

(Back to The Battle) The first of the enemy came from the West of the town from the cover of a nearby hill. My Sudanese troops only managed to get two rounds off off before the Mahdists where up the walls and upon us. I took a half company of men to help clear them, the battle went back and forth; two company’s of brave troops where lost. More Mahdists in greater numbers appeared from the (Western) hill and dust from other enemy could be seen by Warburton and Hackers troops from the front of the town (East). I sent orders for my men from the North and Southern ramparts to return to help defend the Eastern position. The Western section of the town was now undefendable with the numbers of troops at my disposal and the closeness of the hill that concealed the enemy’s approach, so I ordered my troops to consolidate ground around the Armoury and the main food/ stable block.

After the second wave of Mahdists came down the Western hill and third and fourth waves appeared supported by cavalry it was now clear that the rear (West) of the town was the true intended place of attack and the forces against Hacker and Warburton where a feint to distract our dispositions.

Warburton took command of the troops I had left with him at the front of the town ad led them to my aid with the Gatling gun in tow, and Hacker sent his Egyptians to help defend from the overwhelming odds.

The second wave of enemy warriors broke over the undefended north side of town and attacked Hacker’s Egyptian troops and the remains of the mauled Sudanese guarding the Armoury. I led the defence from the balcony and roof over part of the reinforced stable/store building which now drew the attention of the second wave of Mahdists. Both parts of the second wavered from our now improved fire power, and yet more came. No sooner had the second wave been driven off than the next wave was at the walls of the town. (Thanks-be for the musket drill with live ammo, there is nothing like the real thing to train troops to noise and the sound of battle!). The third Mahdist wave was felled like corn to the fire-power of our Sudanese troops and the forth wave faltered and retreated. The attack from the front of the town faltered and fell back. The battle for Toker was over. 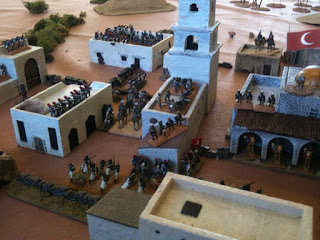 The Diary Of Lt. Hacker; ex Welsh Guards now in the service of The Khedive of Egypt (does Lady Khedive ride around naked?)

Tuesday Morning
Three years. Three long long long years. I suppose being in the service of The Khedive could be worse. If nothing else I’ve learned to walk like an Egyptian, though I still haven’t got the hang of Egyptian reggae. It’s not the Welsh Guards, I can tell you. No sheep.

Gordon’s got his Khartoum. Hacker of Toker doesn’t have quite the same ring, which is ironic as I’m stuck in the bottom hole of Sudan (a country that has more bottom holes than a naturists yoga class)

Ah! Here comes dinner “Tiffin wallah! What’s on the menu today, and for God’s sake man put your jibbah on when you come to see me!”

“Effendi; harissa spiced lamb, chicken tagine with tabbouleh, Baba ganoush, finished off with a choice of halva or falafel”

“God!” “I can’t believe anyone would eat this stuff. Have we run out of bully beef and spotted dick?”

There you see, dear Diary, what I have to put up with out here. If I have another of those dreadful honey oozing almond nut confections encased in delicate yet crunchy filo pastry they call baklava I shall shave off my moustache, stick it to Doris the donkey and start calling her Brian.
I don’t know how many times I’ve asked the Cook Wallah to rustle up some good old rock cakes. That’s the thing to keep spirits up. We British haven’t conquered half the world by eating foreign muck. I’ll go as far as drinking Scotch whiskey but that’s it.

Strangely, however, being out here has given me an unexpected penchant for interior design. I’ve just done up my quarters. Do you know how difficult it is to source Farrow & Ball ‘Mole Breath’ grey out here? It looks absolutely spiffing now, goes superbly with the local rattan furniture and Egyptian cotton throw. I’ve also framed my watercolours of local scenes and put them on the wall. The Colonel said to me they are pretty good and I should exhibit them in Cairo. Who knows, if I sold enough I could buy a farm back in the home country and retire as a country squire.

Tuesday Evening
I’ve just heard that Drydon-Spunck has arrived with his force from Tipilli. Apparently they gave the Mahdi’s men a bloody nose but expect another attack soon. I remember meeting Drydon-Spunck’s matelot cousins Stains and Bates on the RN gunboat HMS Cocksure.

Just had dinner with Cpt Warburton, temporarily in charge due to Col. D-S being indisposed with a bad rash to the nether regions. We are to prepare for action tomorrow with the enemy expected in front of the main gate in the morning. I’m to defend the gate with my Sudanese and Egyptian boys. I’ve graciously agreed to let Warburton have my quarters tonight.

Wednesday Morning
Apparently that bimbashi Warburton decided early this morning that my quarters were blocking the gun’s line-of-fire and has knocked them down. Destroyed my rooms completely, burnt them, trampled on, totally despoiled and desecrated. Even my Afghan rug is gone, ground into the dust. Has the man no heart or vestige of civilisation. Frankly I don’t care a jot about their silly little war. Who’s the mad one eh? The Mahdi with his 72 virgins, his daily massage, camel’s milk baths, collection of Afghan rugs and endless supply of bully beef, roaming free through the verdant valleys and oases; or us stuck in this God-forsaken dive swatting off the flies and having all our precious paintings trashed by a vandal in a topee?

Wednesday Evening
Predictably the Mahdi’s men attacked the rear of the town so I didn’t really see what went on. The clouds of what looked like brown dyed cotton wool puffs in front of me turned out to be giant puffs of cotton wool. I sent my two Egyptian companies to the other side of town to take a shufti. A Fellah soon reported back that they spied a few Fuzzies as they broke into the fringes of town but were soon seen off with the proverbial whiff of .577” bullets. I personally took command of the cannon overlooking the main gate and turned it round to fire at retreating Fuzzies. Unfortunately, a stray shot set fire to the town market. Napier can show off his wit with ‘Peccavi’  and Campbell has his “Nunc fortunatus sum”. I suppose I’m stuck with ”I have smoked Toker”, whatever that is in Latin.

Still, tomorrow is another day.